This thing was probably my favorite piece at Burning Man. Eighty pianos with strings exposed and a tub of sticks to bang with.

The amazing thing was that, as you walked through the thing, the soundscape would change. People would get in sync with each other and then fall back into chaos again. It was strangely beautiful.


i was wondering why there weren't 88 pianos... and i was sad to not see it burn. though those fires on the horizon looked gorgeous. 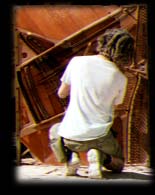 I got rid of all my piano lesson angst from childhood. I'm free of it!!!


This was Bigrig Industries favorite piece at BM. Unpretentious and beautiful.


i heard there were 88 pianos.
i saw it burn early monday morning...
jezuz was it ever hot!


Someone actually got interactive with me there. "Yah! that sounds good! do it again! let me play there too!" And they did. And we did.


yea,tho I walk thru the valley of pianos,I fear no music


The structure by itself was surreal enough in the desert at midnight, but a dimension of sound was also present. What at first sounded like an annoying racket became upon closer consideration a strange melange of percussion and ephemeral notes on high strings, a blended, bittersweet cacophony like the sound of spider webs and ocean breakers and clockworks, like a Disneyland exhibit transplanted to the underworld. This chaotic music was produced by a dozen or so people beating the walls with sticks, some striking the soundboard, others the strings, some playing eerie tunes, others beating primitive rhythms. One man who certainly appeared to be drugged was whacking intently on an outer wall with a marked lack of control. We went inside and found a small bar, unattended, over which stood a Cinzano umbrella, and more people making strange music, some of them perched up in nooks in the walls. I picked up a splintered piece of action and tapped out a melody on some high strings (the lower notes were broken and hanging uselessly into space), and I was reminded of a dulcimer, except that the dulcimer was part of a larger organism with a whole team of players not unlike a dulcimer orchestra at the zoo, a room full of monkeys flailing at dulcimers, in pursuit of a Mozart requiem for pianos.


This was one of the most amazing things I've seen a human assemble.

I wandered around it slowly, taking it all in, focusing on different players and then pulling out to take in the wholw picture, the whole sound, the whole energy of eighty pianos and dozens of bodies.

Then I found my instrument. I pulled a black key (C sharp) from one of the keyboards. Dragging it across the closest set of strings produced the most amazing sound I've ever heard. I stopped, startled. The people around me paused briefly as well, looking at me. At the end of the key's shaft was a large metal nail, that somehow amplified everything. I looked at it for a moment longer and lost myself among the pianos.

With exception to about a pound of playa dust, that black key (C sharp) is all I took away from Burning Man. It sits on top of my monitor, where I grab it now and again when I get caught up in bullshit.


What's this? I found it deep within the chords that rang. The note that for so long a carried in my head, I now captured in my ear. It, read out for all to hear, went something like this, but not quite. Maybe there's something more on the other side...?


wow! you're playing my favorit tune.heeee


We arrived early Wensday morning and saw this strange, dark mass off in the distance. Visited it later in the day and found piano camp in progress. Fell in love with it. We visited it every day, drinking beer in its shade and checking on its progress. Beating on it Sunday night , wearing formal attaire with a drink in one hand and a graciously supplied drumstick in the other was one of the most amazing times of my life. Steve Heck is genius.


This experience was much more enlightening than that darn visit to Disneyworld...I'd come back for more!!


Thinking that it was a bonfire for the local football team ,I was hesitant to attend BUT... in finding that it was the cremation of Liberace.... I would not have missed it for anything!


The Piano Bell folks were the 1st Burning Man folks I talked to. We were in the Twin City Surplus in Reno and there was this big flatbed full of mysterious wooden items. She said to come on out and have a beer when we got to the playa. Little did I know that those wooden objects were the makings of my soon-to-be favorite Burning Man installation. All those pianos. All those lessons over the years. And, best of all, no grandmother saying not to bang on the piano! FREEDOM AT LAST! My only regret is not staying up for its burning. So, Steve Heck... What's up for NEXT year??? And thank you so much for this year's incredible contribution! Miz Jewelz


I learned to play the piano well in 6 months. This photo reminds me why i wanted to learn. massive things.


I think the only sense the Piano Fortress didn't appeal to is taste. I saw it, heard it (!), and felt it. It genuinely smelled like concentrated piano, and I think I even picked up faint but anxious psychic memories from recitals long ago. But I decided not to lick it.


Sipping on an ice cold Olympia with my buddy Tyler, and sitting on a couch overlooking the whole thing, I really felt that the Piano Bell was the most amazing piece of artistic expression I have ever seen. Maybe every town needs one, right in the center of every playground, and every city park, and anyone who needs to let out a little anger and frustration can grab a stick or whatever, and bang the crap out of a piano and create so much cacophonious chaos that all of their problems just blend in with the manic sounds of a million strings being whacked.


When they burned the pianos Vanessa would get on the radio "You gotta come up here and see this" ...5 minutes later..."you really should come check this out it's so cool!".... I couldn't look at another fire to save my life - I told her "Vanessa, you have some fun for once...I can't see anymore flames"

When they burned the House of Doors, Joseph and I were sitting in the ranger tent trying to avoid the world and some people ran up and tried to get us to go and watch. We looked at each other and at the same moment said "Oh boy. Another bonfire."


I was down on my knee with a bass string wrapped around both fists, sawing like a banshee on a couple of wires till I could feel it in my lowest and highest chakras. Kramping I stumbled to my feet and saw my friend Kathy waving to me to come bang with her and Matt. We slide into a groove almost immediately and I was amazed that I could hear what we were strumming and then other melodies/chaos wafting over the top and through the bell....at the bar, Baby D was standing there with her accordian and she asked the bartender to sing an Irish ditty, he did,in this sweet, angelic voice! We were in nirvana and Baby D kept saying, "This is the most beautiful place on the earth."


yes, i had many many very cool sound experiences at Burning Man.

DID ANYONE ELSE TAKE PIANO LESSONS AS A KID? mine were'nt anything like this.

I was standing outside of the structure on sunday. I was not making any fast movements. I was about 6 6 feet away from this PIANO FORTRESS, but I was on this fast and crazy ride - wip'en thru tunnels - fly'en around turns - I was go'en and feel'en the ssssppppeeedddd of SOUND!!!. To top it all off, Some grooooovvveeey - hhhaaazzzeeeyy fairy look'en chick-ade chick was floating and swirling all around


My favorite thing there. I remember banging away and getting a beat down when I noticed a very serious naked chick was tapeing my performance. It was a surreal experience I'll never forget. I wont forget her boobs either.