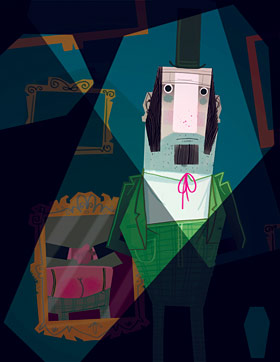 The mortuary sits across the street from my high school. It’s an odd juxtaposition to be 16 and see where you’re going to end up.

I knock on the door. The funeral director recognizes me and shakes my hand. We all have the image in our heads of the kindly undertaker: a tall man dressed in black, with a deep voice of reassurance. My undertaker, however, is wearing a rumpled green suit and breathes through his mouth.

His name is Todd. He was a few years behind me in school, a pudgy kid with a ruddy face, and pigeon-toed feet. When he ran down the hallway to class, you could hear the scraping of his corduroys. On the football field, his pants would struggle in vain to cover his ass. I’m sure he’s now a responsible citizen, but all I can think is that my mother will be buried by Buttcrack Todd.

My hometown in eastern Montana was a roiling hotbed of calm. Everyone got their picture in the paper eventually. Front-page news like: Surly Teenager Shovels Snow, or: Woman Wins Blue Ribbon for Cheese-and- Marshmallow Bean Salad. Whenever this happened, the funeral home carefully clipped the item and mailed it to you, laminated in plastic, attached with a little note: “With Our Compliments.”

This always struck me as an excellent marketing ploy, targeting both ego and guilt. It seemed to say, Go ahead, soak it up, bask in the media glare. But when a loved one passes on, who are you going to call?

So I ask Buttcrack Todd, does the funeral home still do this? He chuckles, a little too loudly. “Nope. Plastic’s too expensive. Now we just mail the clipping.”

“C’mere, Jack, you live in California, you might appreciate this.” I follow him down a hallway, listening to see if his pants make a noise, which they don’t. We turn into a chapel. The back wall is decorated with flowers, interspersed with taxidermied heads of deer and other creatures, all facing a casket. Like a Nativity scene for carnivores. A rifle hangs on a hook, presumably the instrument responsible for the dead animals. Leaning against the coffin is a poster-sized photo of the deceased. The old liver-spotted guy wears hunting orange, fearlessly holding up the head of a freshly killed mountain sheep. This is a shrine to his life.

Buttcrack Todd gestures to the tableau, waiting for my reaction, convinced he’s offended my sensibilities, as if the moment I crossed the California state line, I started wearing drawstring pants and getting tofu enemas.

I probably have changed a lot since moving to San Francisco. Over the years, I certainly have acted like a jerk, hustling and jiving and acting smarter than I am, measuring my self-worth in Google search results, lying about my past and dropping names and befriending pushy, competitive pricks, just because they might help my career. Like most Americans.

So what’s a few dead animal heads? The chapel looks like any cowboy bar I grew up in, except the moose head would be decorated with Christmas lights. With a beer can shoved in its mouth.

Buttcrack Todd seems disappointed at my nonchalance. I want to tell him, Dude, I live in San Francisco. I’ve seen overweight lesbians on Harleys, leading parades, and appreciated it.

In a pristine moment of timing, my father and brother and sister arrive, my father still puffing on a cigar. My brother stops at a display of grief brochures, grabs a fistful and surreptitiously hands them to me behind his back. “Here, take a bunch of these,” he hisses.

I quickly stuff them into my pocket. Buttcrack Todd swings into professional mode, gathering us together and adopting a practiced demeanor that says he’s so sorry for our loss.

He’s wasting his time. My family has always been a laser beam of frugality. Today we are determined to deal with the funeral arrangements without spending one more dollar than necessary. It sounds cold, but not unusual. In this part of the country, it’s all about keeping a stiff upper lip. Shrugging your shoulders is considered an extreme emotion. In fact, on the Montana state flag, inside the official seal, it actually reads, never praise a child in public — it’ll just go to his head.

Buttcrack Todd walks us to a closed door with a sign reading casket showroom. “You can spend as much time as you want. Don’t worry. We have all day.” He ushers us inside. “Whenever you feel comfortable with your decision, just come out and ask for me.”

The door shuts behind us. My family immediately fans out like a clan of industrious monkeys, tapping the caskets, touching and poking the fabrics. I’m surprised my father and brother aren’t on the floor with a flashlight, saying things like, “Well, I’ll be goddamned. It’s just U-bolts and flange washers!”

There’s a coffin for every price range and level of perceived grief. The no-frills model, constructed of what looks like cardboard, is completely stripped down, bare bones. Which, in a few months, is what you’ll have. Bronze, copper, stainless steel, 16-, 18-, 20-gauge steel. “Non-rusting” finishes. Many are named for the local ranch geography. The Yellowstone. The Tongue River. The Farmstead. I look for something more realistic, like a casket called The Bank Foreclosure, but I guess they want to keep it upbeat.

You can even order optional “casket corners,” little pieces of decorative plastic that snap onto the corners of the coffin. Various corner designs can reflect the hobby of the deceased, as long as your hobbies are hunting, fishing, or waving the flag.

Within a few minutes, a cloud of cynical black humor develops over the room. It’s reassuring to see it in the family DNA. My brother wiggles a casket corner, depicting a mallard duck in flight, and smirks: “Hey, doesn’t this look nice?” My sister stands in front of a Barbie-doll pink coffin called The Duchess, with pink interior, and scowls: “She would not like this.” My father examines a baby-blue casket called The Powder River Blue. “That sure doesn’t look like the Powder River,” he grumbles. He points his cigar at a brown coffin: “It looks more like that!”

I huddle everyone together and tell them I heard my mother once say that she didn’t want to be buried in a coffin. Her exact words were, “I want the worms to get me.”

We all ponder this fact for a moment. It’s obvious — we have to go for a wooden model. Wood is porous. Worms could conceivably bore through it. But which one? The Autumn Oak, or the Ambassador Cherry? We settle on the Regency Pecan. Nobody remembers that my mom was allergic to nuts, but it’s a little late for that now. And we’re getting sick of this room.

We open the door and find Buttcrack Todd, shocked to see us. “Done already? That wasn’t more than ten minutes! Okay, good deal.” He claps his hands. “Let’s go write the obituary!”