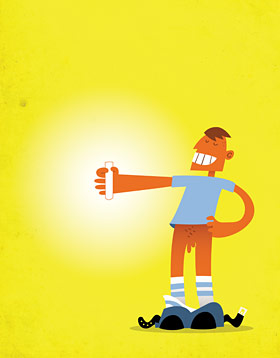 When I was in college, I came up with a brilliant plan to avoid getting a summer job. Simply by harvesting my own body secretions, I could avoid the polyester-uniformed, “May I help you?” nonsense that accompanies most summer employment. The financial reimbursement from donating sperm once a week would almost equal that of a part-time job and would have little impact on the frequency of my partnerless sex.

I first had to work out the moral dilemma involved with donating sperm: I would be selling my DNA to complete strangers. Eventually I concluded that since I was such a spectacular person, it was practically my duty as a resident of this planet to share my gene pool. (Plus, this method was probably much more ethical than leaving my semen on public restroom seats.)

So I set off to the sperm bank to become a human dandelion on a windy day — spreading my seed in the fields of the infertile. A call to my local branch — whose number was available in the yellow pages — provided me with a recording that told me to come down to their office. I would have to fill out some paperwork, answer some questions, and leave a sample.

Of course it was not a real bank, which was a shock to me, it was more of a doctor’s office.

Few experiences can compare to walking in the door of a sperm bank. How do you dress for a date with a test tube? What do you say when you walk in the door?

Eventually they gave me a clipboard and some forms. Most of the questions were intended to determine what sort of genetic mishaps might be hidden in my little swimmers. There was no photograph required, no IQ test, no math, no multiple choice. I was disappointed to discover that there was no opportunity to dazzle them with the superior worth of my seed. This was especially frustrating since I saw myself as more of a “quality over quantity” type of patron.

When I finished the paperwork, they gave me a finger-sized test tube and directed me to a bathroom. Sitting on a toilet seat may have an element of erotic thrill to it, but the sanitized white tile floors and walls were not a part of any fantasy I could think up. The well-meaning staff had placed a magazine rack with a few ruffled copies of Playboy next to the toilet. I’m sorry, but in order to counteract the non-arousing presence of a test tube, I needed something a little stronger than Playboy. I needed a naked, buxom nurse in the room with me, begging for my sample.

I needed something a little stronger than Playboy. I needed a naked, buxom nurse in the room with me, begging for my sample.

And with that vision in mind, I fulfilled my obligation.

I exited the bathroom hesitantly. Holding the test tube in front of me was like holding a sign, “Look what I just did! I just played with myself!” I gave the condemning evidence to the lab tech. What a job this lady had — handling warm test tubes filled with masturbatory offerings all day. She thanked me and had me sit in the doctor’s office. Three minutes later, the doctor entered with the paperwork I’d filled out earlier.

“You wrote that you’re a student. Do you go to school in town?”

“No, I go to the University of Redlands.”

“Will you be moving back there in the fall?”

“I’m sorry, but to be a donor we require a minimum one-year commitment of once-a-week visits. That simply wouldn’t be possible if you were away at school, now would it? Thanks, anyway.”

What? Couldn’t they have disclosed this deal- breaker before I bared my most intimate fluids and so unceremoniously spilled my seed? How humiliating. But what can you say in that situation? “Ah, okay. Well, thanks for letting me use your restroom.”

I felt so vulnerable and used. Plus, I had a strange desire to return to the bathroom and cuddle with the tile floor.

I stood up, checked to make sure my fly was zipped, and walked quickly back out to my car.

I should have asked for my sample back.